Poppy’s Crèche is a self-funded small charity based in Suffolk, England and we specialise in rehabilitating sick and Orphaned Hedgehogs. It is run by Ann Rushbrook and a team of volunteers who work to hand rear the young hoglets, administer necessary medications and eventually release them back into the wild.

As a volunteer at Poppy’s Crèche since August 2017 – one of Green Teen Teams Sponsors – I have began tracking the progress of one of our many hedgehogs named Harry that came to us in early February. February would be a time when most hogs would still be in hibernation due to the lack of food available to them as a way of preserving energy, especially as the weather has been colder recently, although it is normal for hedgehogs to come out of hibernation for short periods of time even in cold weather. When Harry first arrived he weighed only 290 grams while the normal weight for a hedgehog in the wild would be between 800 to 1100g.

Upon his arrival Harry was given levacide – an injection administered to help slow down the pace of diseases until he could be diagnosed and treated with a stronger drug, as well as Marbocyl as it can lead to the death of bacteria preventing bacterial infections from taking hold. Samples of his Faeces were taken and observed under a microscope to identify if he was infected with any parasites or had any infections and unfortunately for Harry he was found to have Lung Worm Capillaria – a form of parasite that may cause symptoms such as coughing and difficulty breathing in hedgehogs.

He was treated with levacide and marbocyl for two days and then when he began eating steadily he was treated with a dose of Ivomec calculated to his weight. Ivomec is commonly used as a lung worm treatment in hedgehogs, domestic animals and cattle. During the Ivomec treatment if a hedgehog is particularly young, old or weak it is hand fed and kept on a heat pad or in an incubator for the duration of the treatment.

As the hedgehogs at Poppy’s Crèche are kept in captivity there is a higher risk of spread of disease, and during the winter when even rehabilitated hogs cannot be released due to harsh weather conditions and a lack of food this risk is increased even further. To reduce the risk between hogs, Harry is being kept in his own box as exposure can increase the likelihood of infection. Harry is currently being fed on meaty dog food as a further precaution because hedgehogs natural food can lead to re-infection in a captive environment. Fresh water is also provided and changed several times a day by the volunteers (since hedgehogs are not known for being very hygienic).

Harry has been making progress and he is slowly increasing his weight everyday and has made it to 448 grams so far. I hope to give further updates on Harry leading up to his release.

For more information on Harry and other hogs at Poppy’s Crèche visit :- http://poppyscreche.org/ 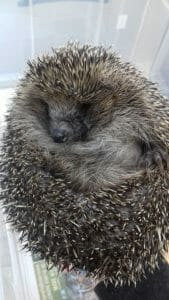