A practical experience in the field of conservation

As a volunteer at Poppy’s Creche – a hedgehog rescue and rehabilitation centre, one of the Green Teen Teams sponsors I was recently able to work as a student at Parco Natura Viva in Verona, Italy, where I was able to work with the Biologists and Conservationists and gain practical experience in the field of conservation.

During my time at Parco Natura Viva I worked closely with Dr Barbara Regaiolli and Giorgio Ottolini, researchers into animal welfare and behaviour. With Dr Regaiolli I was able to learn about and see in practice, the significance of enrichment on animals of all species in captivity. Enrichment is vital for the providing a positive environment in which animals of all species can thrive and perform natural behaviours.

Parco Natura Viva is one of many wildlife parks that are implementing breeding programmes for vulnerable, endangered and critically endangered species, and for this reason enrichment is even more important as when members of a species are free to express their natural behaviour in captivity it can increase the chance of successful breeding.

I was able to prepare enrichment for a wide array of different species of animals at the park including, barbary macaques, meerkats, ring-tailed lemurs, kea and spectacled bears. To avoid the animals becoming too used to one form of enrichment, it was constantly varied and new enrichment tools made from different materials or with a different design were introduced every day. Enrichment at Parco Natura Viva was designed to mimic natural behaviour as much as possible and to use natural materials, an example of enrichment for the kea would be taking some nuts, seeds and fresh fruits, putting it inside a hollowed tube of bamboo with one end sealed and then wrapping it in a cotton fabric to make it more difficult for the kea to reach the food inside. Not only is enrichment used to entertain and make the animals express behaviours they would in the wild, but it can also be used by students to test whether the behaviours being expressed by an animal are natural, or as a result of being kept in captivity for an extended period of time. 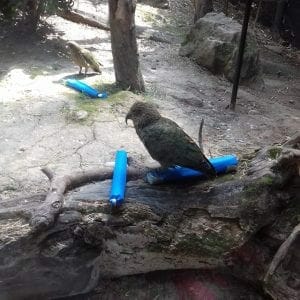 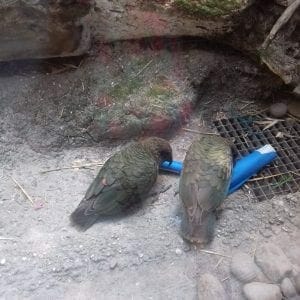 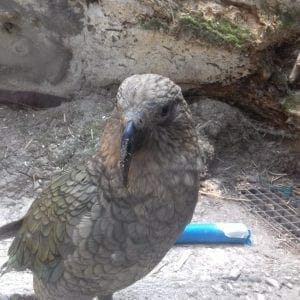 I observed an experiment by a student carrying out research for her master degree on three different species of macaw, blue and yellow macaws, scarlet macaws and green and red macaws in a mixed species aviary. The experiment involved an enrichment device that was a stick with two pieces of string tied to either end, one end would be tied to a peanut and the other would be left empty. The macaw was expected to sit on the top of the stick and pull one of the two strings towards it in an attempt to find the peanut. The aim of the experiment was to see if different species would be more likely to pick the end with the peanut first and to test the behaviour of different individuals within the group, where some would be more likely to investigate a new enrichment device first, or some would wait until other individuals did before engaging with enrichment themselves.

Over my time there I carried out an investigation into whether the black macaws were expressing their natural behaviours. I did this through producing an ethogram – a table of all of the different behaviours expressed by a certain species. On my first day I sat beside the black macaw’s aviary for an hour and made a list of the various behaviours I saw for example interacting with bamboo plants in the aviary, making calls and scratching at bark. After this I categorised the different behaviours, grouping similar ones so pecking at bark, removing leaves from plants within the aviary and interacting with the enrichment device that I had created and placed in there went under the category of “manipulating objects”. I then created a table with eight categories that represented all of the behaviours and a time scale that would allow me to record whether the macaws were displaying a behaviour every 15 seconds for up to 10 minutes, every 10 minutes being one session. If a behaviour was being recorded at the end of every 15 seconds I placed an “X” in the box under the category that was related to the time. I did this for 3 sessions on different days and then combined my results on excel to produce a pie chart of the percentage of time the black macaws spent performing each activity. My data ultimately showed that the black macaws at Parco Natura Viva were showing positive behaviours instead of negative ones that would be expected in captivity when little to no enrichment is provided for them or they do not have the opportunity to hide away from visitors when they feel threatened or would prefer to be out of sight, such as pacing or scratching at the glass or enclosure walls. Parco Natura Viva ensures that every enclosure for every animal has at least 1/3 of it hidden from the public and the visible areas are usually quite shielded with grasses and trees which means that animals constantly have the opportunity to hide and this will reduce agitation and anxiety in the animals, making for more successful breeding programmes. 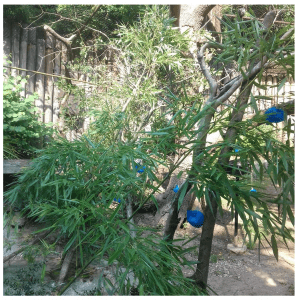 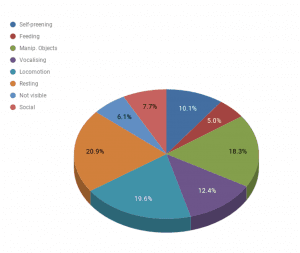 At the park I also worked with Dr Katia Dell’Aira, the head of the education department. With the education department Parco Natura Viva aimed to make young people more aware of their environment with summer camps that involved visiting the animals, helping to make enrichment devices and telling them stories about different animals. Aiming to get young people involved in conservation and making them aware about the impact humans can have on the planet is something that was amazing to be a part of.